Now that we’ve released Copperworks American Single Malt Whiskey, we talk with folks from all over the world about whiskey. And a question we often get is “Are you making bourbon or scotch?”

The answer is “neither,” because Copperworks makes what is a fairly new style of whiskey: American Single Malt Whiskey. It’s an emerging category of whiskey, still new enough that the U.S. Alcohol and Tobacco Tax and Trade Bureau (TTB) doesn’t have a definition for it.

Before giving our definition for American Single Malt, we’ll step back and define the term “whiskey.”

We Love All Kinds of Whiskey

Whiskey is a spirit made from grain, distilled at a proof lower than 190 and usually matured in oak casks. (If you make a spirit from fruit, such as grapes or apples, distill it similarly to whiskey, and put it into oak casks, you’ve made brandy.)

Now onto the different types of whiskey. Here are the ones you’ll encounter most of the time:

Single Malt from America and Elsewhere 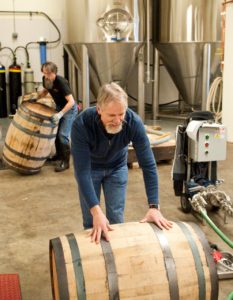 Rolling out the barrels of American Single Malt Whiskey

There’s a small group of distilleries in the U.S., including Copperworks and our friends a few miles away at Westland Distillery, that make what we call American Single Malt Whiskey. This group of distilleries is working to define the category of American Single Malt Whiskey and to come up with what’s called a “standard of identity”—the formal, legal characteristics a spirit must have to be included in a category.

Until a standard of identity is established, here’s how American distilleries are defining the American Single Malt Whiskey: whiskey that is produced at a single American distillery using malted barley as the only grain in the mash bill. (“Single” refers to an individual distillery, not a single kind of malt or a single barrel of whiskey.)

Starting with a Craft Beer

Copperworks is producing a single malt whiskey that has characteristics in common with single malt scotch, but also some important differences.

Our whiskey is made from 100% malted barley and is distilled in Scottish copper pot stills specifically designed to produce whiskey. But key differences from Scotch (other than the country where we reside) are that we begin with a high-quality un-hopped craft beer and that we age our whiskey in new, charred, American Oak barrels.

The Scots begin their whiskey by producing a “wash”— definitely nothing like a quality craft beer. And they age their whiskey in used oak barrels, often ones that come from bourbon distilleries.

We love the full, rich flavors that a craft beer produces, and the vanilla, caramel and oak notes that new barrels impart to whiskey. So there are some big differences between our whiskey and scotch. (And we love scotch, by the way…)