Craft Distillery on the Seattle Waterfront 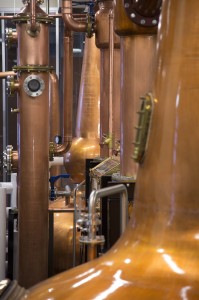 Named “2018 Distillery of the Year” by the American Distilling Institute.

“The Copperworks distillery is something of a rare phenomenon: a business that is both of the moment and one to keep an eye on in the future.”
— Dom Roskrow, Whiskey America

Copperworks Distilling Company is a craft distillery, tasting room and gift shop located on the waterfront in downtown Seattle. We produce small-batch American Single Malt Whiskey, a series of gins, and vodka, all from malted barley.

Our spirits are distilled in traditional copper stills that were specifically created in Scotland for Copperworks and for the distillation of each individual spirit. We focus on creating distilled spirits that can stand impressively on their own or serve as a delicious base for new and classic cocktails.

Copperworks opened its doors in 2013 offering tastings, tours, and other events focused on enjoying and learning about fine distilled spirits. The company has won numerous local, national and international awards. Copperworks spirits are found on the shelves of bars, restaurants, and retail stores through Washington State.